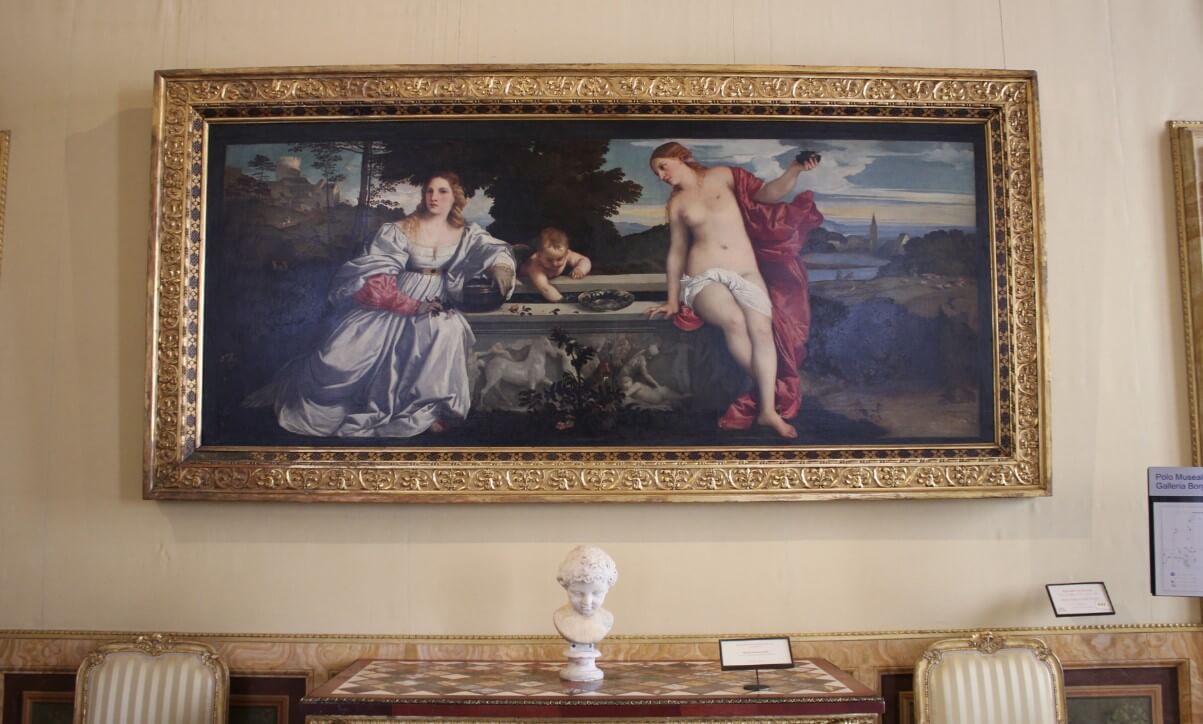 Sacred and Profane Love: Secret Meaning Behind The Painting

Even the title itself is not necessarily believed to be the original dreamed up by TItian! Let’s find out more about it so you can impress your friends when you visit the Borghese Gallery during your trip to Rome.

A Renaissance era painter who came to be known as a core member of the Venetian School, Titian hailed from a town near Belluno.

He is to this day considered to have been one of the Italian region’s most talented artists due to the many different painting methods he employed with ease.

Titian began to make a name for himself in northern Italy in the Venetian region, picking up rich patrons who sponsored his early pieces.

Eventually the Habsburgs and finally even the Pope were commissioning his works. At the end of his life he was certainly considered to be a key cog in Italian Renaissance painting.

Titian lived a long life, and although the exact year of his birth is disputed, he was rumoured to be almost 100 when he died!

What is known about his life is that his parents sent both Titian and his brother to Venice specifically to learn the art of painting.

His early pieces include the Gypsy Madonna and a fresco that can be seen at the Morosini Palace.

Later he worked for the artist Giorgione – and a number of pieces originally attributed to Giorgione are thought to actually be really Titian’s.

Sacred and Profane Love – Elements of the Painting

Behind the women is a little boy – with wings, perhaps depicting Cupid – who is playing with the water. The woman on the left is dressed in fine clothes – usually believed to be a wedding dress. On the right, the other woman is almost naked.

On the edges of the fountain are a couple of metal bowls. The fountain – or water trough as there does not seem to be any point for the water to enter – has carvings on its base of a horse and some figures.

The meaning of the Titan Sacred and Profane Love 1514 remains disputed to this day. Generally it is agreed that the painting was indeed created to celebrate the marriage mentioned earlier.

Some scholars have proposed that the women in the painting are both depictions of Venus – or Venus twins, one with clothing being earthly and the nude being from the heavens.

Others have disputed that the clothed figure is actually a representation of the real life bride, and that only the nude figure is Venus.

Other theories centre around the real life bride Laura Bagarotto. Her father had been sentenced for treason and executed.

Some scholars insist that one of the containers on the edge of the fountain contain his ashes. They point to the image of Venus as a symbol of truth, a message that the man was innocent.

Disputes amongst scholars rage to this day. The most common is as to the identity of the two women in the painting.

As they are almost identical apart from their clothing, it leads to much discussion about a heavenly and earthly form. Others state that it is simply the same woman in different stages of life, or that it is indeed a representation of Venus.

Discussion About Marriage And The Titian Sacred and Profane Love

Clues that this painting indeed celebrated the marriage between Laura and Niccolò Aurelio include his coat of arms appearing on the water trough.

It has been said that the coat of arms of Laura Bagarotto’s family too appears in one of the bowls, however this is controversial.

In addition to the coats of arms, others point to the fact that one of the women is wearing a wedding dress typical to the style of the era.

How To Get Tickets To See The Painting

You can see the Titian Sacred and Profane Love in the Galleria Borghese in Rome! Tickets need to be booked in advance, because the museum only lets a certain number of visitors in per day.

On top of the entrance fee there is also a 2 euro reservation charge to guarantee your place. This is true even if you have free entry granted by a city pass.

Even on the first Sunday of the month when the entry is free you will still have to book. Get your tickets for the Galleria Borghese today. Under 18s go free, and standard admission starts at €13.50. Numerous discounts are available for students or art teachers.

The Borghese Gallery is open Monday to Friday from 9am to 7pm. Bear in mind that visiting is granted only in the reserved slots.

The first slot is from 9am to 11am and the last slot is between 5pm to 7pm. On a Thursday there is an extra entry slot from 7pm to 9pm as well.

Where is the Painting & How to Visit?

You will need to reserve a slot at the Borghese Gallery in order to see the Sacred and Profane Love painting.

When was Sacred and Profane Love painted?

What celebration was Titian's sacred and profane love commissioned for?

It is thought that the painting was commissioned for the wedding of Laura Bagarotto to Niccolò Aurelio.

Who was the artist Titian?

Titian was a Venetian artist who became known as one of the most important painters in the Italian Renaissance school.

The Titian Sacred and Profane Love painting is just one of the many awesome attractions to be seen at the Borghese Gallery. To find out more in detail about both the Borghese Gallery and the surrounding gardens, as well as where to book tickets, check out more of our resources here.