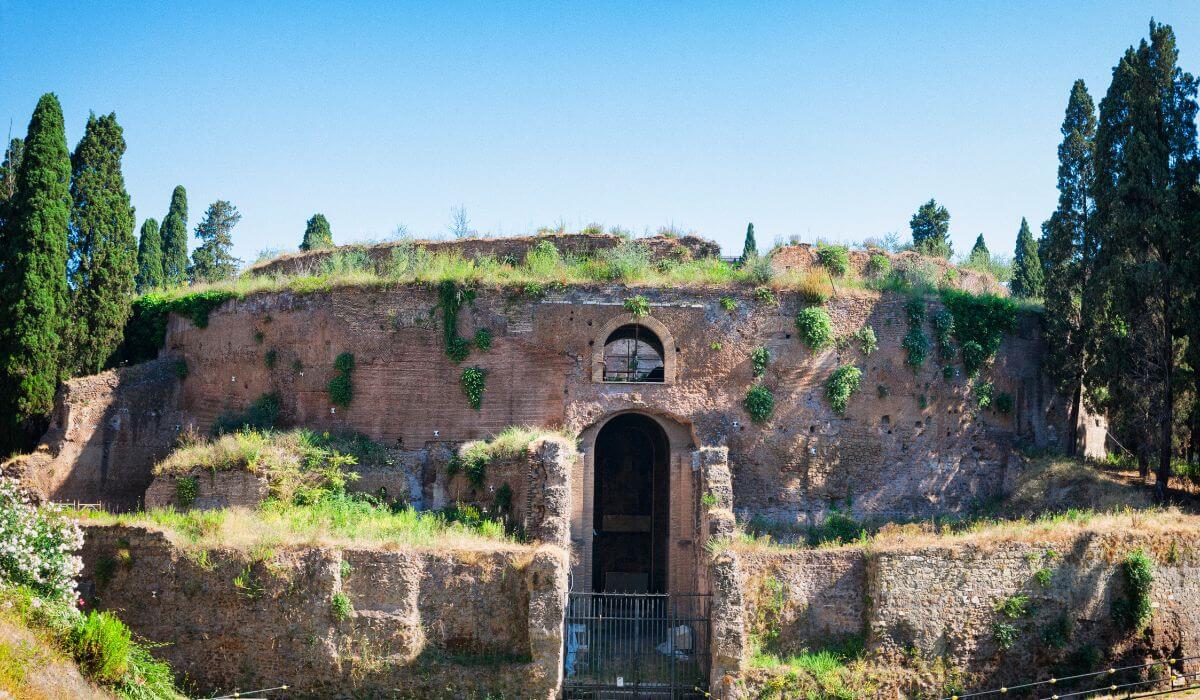 This beautifully restored (2019) tomb was commissioned by the Emperor of Rome at the time – Augustus – in 29BC. A sprawling site and imposing building located on the banks of the Tiber, the Mausoleum of Augustus is a little-known treasure in Rome, and it is well worth a visit!

Especially now that it has reopened after a down time of 14 years, during which it was carefully reconstructed (more about that later).

The Augustus tomb was the brainchild of Augustus. Rome’s first emperor, he was often referred to as Octavian, and reigned from 27BC until he died in 14AD.

Known for his leadership at the time as well as for a period of stability in the overall empire, he claimed a strong lineage. His great uncle was Julius Caeser and he luckily inherited all of Caeser’s assets after his assassination in 44BC.

His accomplishments were far greater than the construction of the Augustus Mausoleum – he consolidated power, expanded the empire, and created a bunch of friendly allies around the region to ensure its stability.

Within Rome, he created structures – including a police and fire brigade – and rebuilt many crumbling structures.

History Of The Mausoleum Of Augustus

Wondering who built the Mausoleum of Augustus? Well, no less than the Emperor himself!

After victory in the battle of Actium, Augustus commissioned the circular structure in 31 BC. The facade was covered in impressive travertine, giving the structure a grand appearance.

So if you are asking what the Mausoleum of Augustus would look like back then you can imagine a huge round structure, topped with cypress trees and guarded by a massive bronze statue of the emperor!

And when was the Mausoleum of Augustus built? It is believed to have been completed in 28BC.

What Was the Mausoleum of Augustus Used for?

Augustus commissioned the tomb as a final resting place for himself and his family, however, there is a long list of other famous Romans buried in the mausoleum – even before he himself died.

Mausoleum Of Augustus Inscription And Materials

The circular walls were constructed using earth and brick, formed into circular external walls. These were then covered on the external facade with travertine.

The diameter is 87 meters in width, and the structure stands 40 meters high. On two huge pillars flanking the sides there were bronze inscriptions, detailing the life and works of Augustus. It is known as the Res Gestae Divi Augusti.

The restoration was reconstructed and reopened to the public in 2021 after a closure of 14 years!

Costing $12.2M and funded largely by an Italian telecoms company TIM, as well as donations from the government. The Augustus museum Rome had become unsafe – trees were growing through cracks in the walls and it had become largely abandoned.

The works, which took 5 years to complete, restored the mausoleum to its former glory.

Mausoleum Of Augustus Inside Look – What To Expect?

The large bronze statue is still intact and on display as you enter the structure, as well as two obelisks.

You can also visit here the tomb of Augustus – the Augustus Caesar grave – plus many other burial sites of his other family members in the mausoleum of Augustus interior.

Look out for the inscriptions telling the story of Augustus accomplishments during his life!

Urban Legends and Facts about Mausoleum of Augustus

Who Is Buried In The Mausoleum Of Augustus Except for Augustus

Lots of Augustus’ family is buried in the tomb. This includes Livia – his wife as well as his sister. Marcus Claudius Marcellus and Agrippina the Elder also rest in the mausoleum, as well as Tiberius.

Nearby Places of Interest

The tomb is located in prime sightseeing areas!

The Piazza de Spagna is a stone's throw away, and boasts beautiful Spanish steps. This means that you are in a prime location for another great and lesser known Rome attraction – shopping on the Via del Corso!

Once you are done, head to the Piazza del Popolo for some people watching and a spot of lunch!

If you fancy taking a tour of the Mausoleum it might be worth your while – recent feedback from visitors who have checked out the attraction since it opened has indicated that the official tours are currently all in Italian.

Hiring an experienced tour guide in your language will mean you don’t miss a thing! Check out this tour which incorporates all things Augustan into the itinerary!

And – if you really hate tours but are interested to learn more, or if you want to check the Mausoleum out before you commit – then visit the official website for a virtual tour!

Tip – the museum does include several flights of stairs. Those with reduced mobility can access only the central area. Consider this before you book.

Get Mausoleum Of Augustus Tickets

You can book tickets in advance for the Augustan tomb at the official website. Tickets cost just €5 + €1 reservation fee.

You need an hour to see the site. If you have a private guide, you are allowed to explore in a 30 minute dedicated slot.

The Mausoleum seems to have a pretty complex set of opening hours on the website that vary by season and day.

Generally, it opens at 9 and closes around 5 or 6pm, with last access granted an hour before closing. Check out the updated opening times before you plan your trip right here.

Where Is Mausoleum of Augustus & How to Get There

Take a look at this mausoleum of Augustus map to show you how central this attraction is!

The Mausoleum of Augustus location makes it a perfect stop off when hitting off the other sites in the area. The best way to get to the tomb is to take the metro to Spagna station, then it’s a 10-minute walk.

Is the Mausoleum of Augustus open?

After a whopping 14 years of closure the Mausoleum reopened in 2021 to the public after extensive restoration. Works are ongoing.

Where is Augustus buried?

Augustus, and many of his family members, is buried in the Mausoleum of Augustus.

Is the Mausoleum of Augustus the largest mausoleum in the world?

Yes - the tomb is thought to be the largest round tomb in the world!

Why was the Mausoleum of Augustus built?

Augustus had the mausoleum built as a place to bury himself and his family at later dates and to celebrate his victories in war.

If you have more than 3 days in Rome you certainly should check out the Mausoleum of Augustus.

If it is your first time however you might want to focus on the main attractions in Rome.