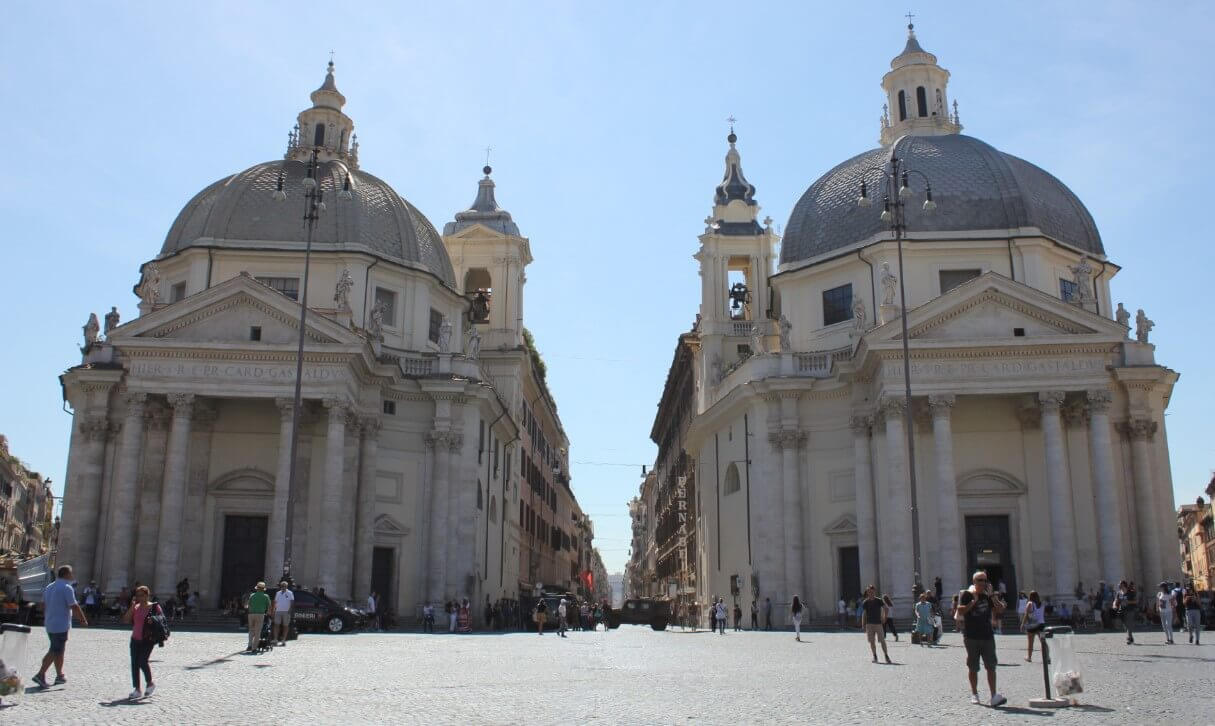 This huge Piazza del Popolo square can be found just inside the Aurelian Walls of Rome. It means “People’s Square” but actually got the name from the poplar trees that are found in the square.

Others say it was because it was paid for by the money of the Roman people. Known for being one of Rome’s most famous squares you can head here for a couple of hours to soak up the atmosphere. Read on to find out all about this beauty.

The square was designed in the early 19th century by Valadier. He removed some existing structures and cleared the way for the vast expanse of space, in neoclassical style, that we know today. In the middle of the square you will not miss the obelisk, brought from Heliopolis in Egypt in 10 BC.

The 3 Beautiful Churches on the Piazza del Popolo, Rome

Entering through the Porta Flaminia, you will see 2 churches, flanked on their sides by 3 roads. The Via del Corso, Via del Babuino, and the Via di Ripetta. You could be forgiven for thinking these 2 churches are identical.

The third church is Santa Maria del Popolo, from which the square is rumoured to get its name.

On the west side of the Piazza del Popolo, Rome, you will find the Fountain of Neptune Piazza Popolo , depicted with his trident. Designed in the beginning of the 19th century by Giovanni Ceccarini, they are worth a quick stop for a photograph.

It is believed the Flaminio Piazza del Popolo Obelisk, which was brought to Rome in 10 BC, was one of two obelisks. However the other one has never been found. Imagine lugging that thing from Egypt in the 10th century BC!!

This beautiful 15th Century gate proudly welcomes visitors to the “People’s Square”. If you look closely, you can see inscriptions detailing restoration work undertaken to the arch. You can also see the statues of St Paul and St Peter that were retrospectively added in the 17th century.

Things to do around the Piazza del Popolo

The Piazza Popolo is surrounded by great things to do! Take a look at a few of them below:

Piazza del Popolo tickets – Do I need one?

No need for any tickets in order to enjoy this Piazza! You can also visit the three churches in the square for free. Just bring your camera and a good pair of walking shoes.

Best places & Delicious Food near by

You are in a prime location here for delicious food! Check out some restaurant recommendations here!

Just a 3 minute walk from the square and you’ll find amazing pizza served up at Pizzare. Here you can also get vegan food in Rome as well as non alcoholic beer.

Freshly cooked pasta in just three minutes? This is the place! Pastasciutta offers traditional food in a modern setting. If you don’t want to sit in, grab the takeaway option and continue to enjoy the views of the square.

Enjoy a bar or cafe

Of course, one of the main draws of Rome is the cafe culture. You’ll find plenty around, perfect for people watching! Check our Rosati, right on the square. Apart from coffee and cake there is a great happy hour! It’s a great Bar Piazza del Popolo option!

There are plenty of hotels near the Borghese Gallery and around the Piazza for all tastes and budgets.

If you want to stay right near the square but save your cash for shopping, then try the Hotel Valadier. Rooms from just €100 per night, and a very good breakfast.

Best Luxury Hotel near by

For luxury that also won’t break the bank, stay at Palazzo Dama. For just around €250 per night you’ll get a stunning room. There is an on site pool and it’s only 200m from the Piazza! Well worth it.

Piazza del Popolo Map & how to get there

Take Metro Line A to Flaminio to enjoy all the Piazza has to offer. To get your bearings, check out our handy map below.

What is the Piazza del Popolo Rome?

It’s a beautiful square, one of the most famous, in Rome.

What church is at Piazza del Popolo?

How to get from Piazza del Popolo to Spanish Steps?

You can easily walk from the square to the Spanish Steps in just 10 minutes.

How to get from Piazza del Popolo to Colosseum?

Take the metro from Flamini to Colosseo via Termini.

It is just a 2 minute walk! Go along the Via del Babuino.

A 4 minute walk, straight down the Via Flaminia.

Well, that’s the lowdown on one of Rome’s most famous squares! Head over to our things to do in Rome guide for more tips and tricks as to how to make the most of your visit to the Eternal City.