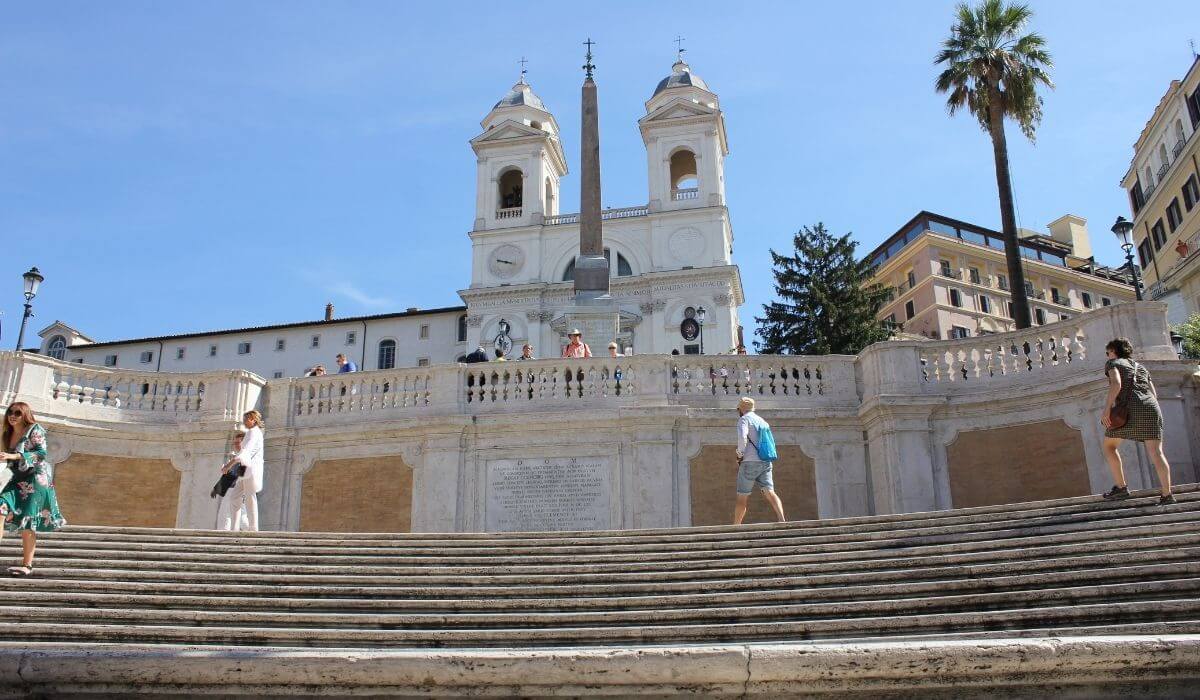 Piazza di Spagna in Rome: Square That Fascinates Every Tourist

The Piazza di Spagna Rome is one of the most well-known squares in the Eternal City – and that’s no mean feat.

Whilst it may not hold the top spot – that goes perhaps to the Piazza Navona or the not-officially-in-Rome St Peter’s Square, the Piazza di Spagna has its own special attractions.

Let’s uncover them together in this overview of this splendid square.

What Is The Piazza Di Spagna?

Located at the bottom of the Spanish Steps, the square forms the base above which the stairs rise to the Trinita dei Monti church.

For that reason, you may see it also referred to as the Scalinata della Trinita dei Monti. Shaped like two triangles that cross in the top, the square is located in a prominent location in the heart of Rome.

Some of the most prestigious embassies and shopping streets surround the area. That includes the Embassy of Spain to the Vatican City, from which the square and the steps get their name.

The area that is now the square was formerly a resting place for horses and carts. They were parked there when visitors to the city went about their business, and as a result there were numerous hotels or inns in the area.

After the construction of the Trinita dei Monti church in the 16th century, the square became known as the Piazza della Trinita. It led, via a somewhat mucky and steep path upwards to the church.

In 1620, the Spanish crown purchased a building in the square and formed an embassy there – it has remained in use until this day in the Palazzo di Spagna. The square’s importance grew – and baroque era design took hold.

Bernini’s famous fountain – the Fontana della Barcaccia – is located here, as is the house of the English poet Keats – now a museum.

The square holds significant meaning as the base of the steps. They symbolize a connection between the earthly and heavenly realm.

What To See In Piazza Di Spagna Location

The Piazza di Spagna Rome is a treasure trove of sights! Here are a few of the top ones.

The Bernini fountain – formally known as the Fontana della Barcaccia – was started off by Pietro Bernini and finished off by his son Gian Lorenzo.

This capsized boat sculpture was conceptualized – legend has it – when a flood brought a boat into the square. Completed in the 17th century, the fountain has suffered damage by football hooligans and other wrongdoers over its lifetime, but is still an imposing presence in this place.

Rising up from the square to the Trinita dei Monti church, the Spanish Steps are one of Rome’s greatest attractions.

The 135 steps were constructed in the 18th century, ending centuries of walking on a muddy and steep slope. The design of the stairs is credited to Francesco di Sanctis, who won a competition to produce the blueprint.

Due to the footfall over the centuries the stairs have been refurbished several times, most recently in 2016.

The church situated atop of the Spanish Steps is actually the property of the French state.

The 16th century building stands on the spot on which Louis XII had begun to build a french style church. Constructed in Italian Renaissance style, the church looks out onto the Obelisco Sallustiano – one of Rome’s obelisks.

In the early 19th century English poet Keats moved to Rome in an attempt to rid himself of tuberculosis.

Unfortunately, Keats succumbed to his illness, and city law insisted that the apartment be stripped right back to the walls and everything burned.

The contents were however preserved by interested literary fans from all over the English speaking world, and a museum was set up in Keat’s former apartment. You can find the museum on Piazza di Spagna 26.

What to Do In Rome Piazza Di Spagna

The area around is perfect for shopping. There are many high-end boutiques in this area.

One such store is the Moncler Roma Piazza di Spagna branch. Newly enlarged, this design boutique is known for its quality clothing and stylish winter sports wear.

The glamorous Via Condotti – Rome’s answer to the Champs Elysee – is located just off the Piazza Spagna. It is here that you will find the Gucci and Prada stores, and many more high end boutiques.

Go on a Romantic Walk

Twilight beckons. The lights are coming on. The area around comes alive in the evening.

This is the perfect time at which to take a romantic walk.

Tip – You can choose to wander around yourself of course, but you may get more value on an organized tour such as this one that takes in the sights of this square and the nearby Trevi Fountain.

If you can’t wait to book your ticket to Rome try to contain your excitement until you can board your flight by checking out this live webcam.

There are plenty of restaurants in and around.

Here is a little selection of our favorites:

Which Train from Fiumicino to Piazza Di Spagna?

From the airport, take the Leonardo Express to Termini station. Then, you can jump right on the metro MEA, direction Battistini, and get off at Spagna.

The square is very central (check out this handy map). It is easily accessible from anywhere in Rome as it has its own metro station on the A line – Spagna.

It is also walkable from many attractions. The Villa Borghese for example is a 10-minute walk away, and the Piazza Navona is about 15 minutes by foot.

4 Most Visited Hotels In Rome Nearby

Like Rome’s restaurants, the hotels are numerous and varying in price and quality.

We recommend these 4 hotels to our readers:

How many steps are there in Piazza di Spagna?

When was Piazza di Spagna built?

Where is Piazza di Spagna located?

It is located in central Rrome.

Is Piazza di Spagna the largest piazza in Rome?

St Peter’s Square wins this accolade, although technically it is not within Rome, but in the Vatican City.

This wonderful square has a lot going for it. Once you’ve checked it out, you’ll want to head on to some of Rome’s other great attractions. Book your skip-the-line tickets today for attractions such as the Colosseum right here.