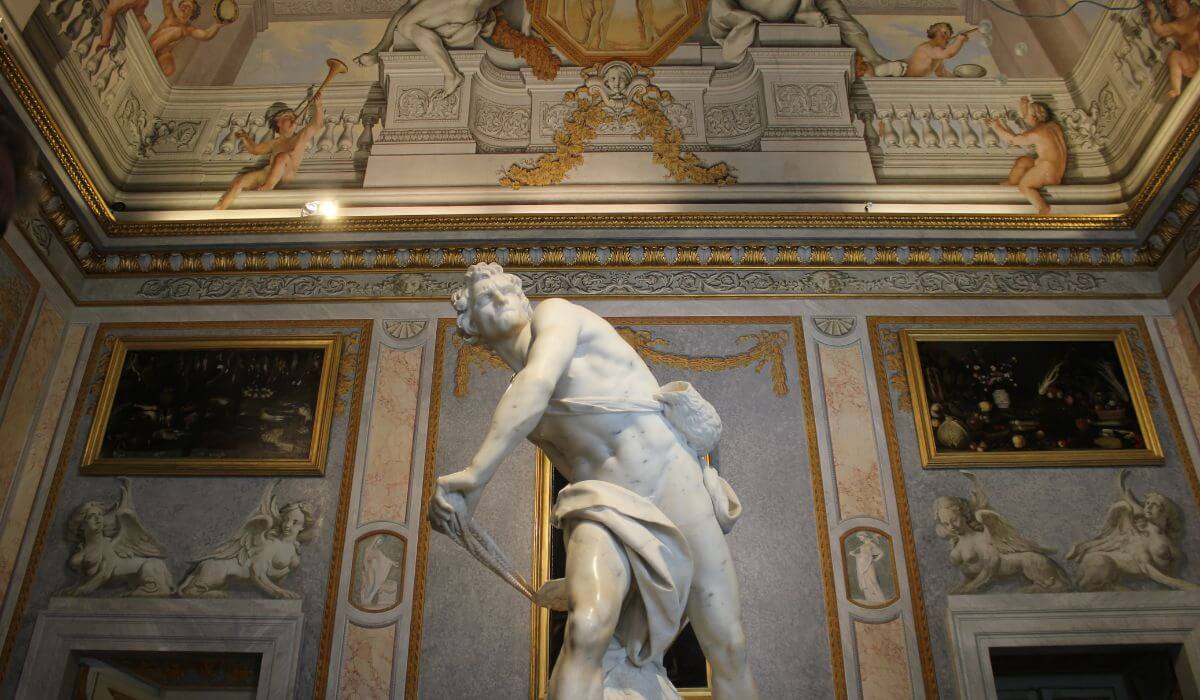 David by Bernini is a classic, life-size sculpture of the hero David from the story of David and Goliath.

Depicted using his famous sling, it is housed in the Galleria Borghese in Rome and offers a different interpretation of the character than other historical statues.

About the Artist Bernini

Gian Lorenzo Bernini was born in Naples in 1598, he was a sculptor, artist and architect, and is considered the originator of the baroque style of sculpture that influences artists across Europe for many years.

Although best known for his David by Gian Lorenzo Bernini, scholars consider him one of the most important artists of the period and certainly the most skilled, producing work of detail, vision, and character far beyond that of his contemporaries.

Aside from the David sculpture by Gian Lorenzo Bernini, other notable works include Apollo and Daphne, Neptune and Triton, The Rape of Proserpina, and Ecstasy of Saint Teresa.

What Italian Baroque Characteristics Does David By Gianlorenzo Bernini Exhibit?

As Bernini is considered the originator of the baroque style, it is not surprising that his most famous work also features baroque elements.

The clearest example is the stance of David by Bernini, with the hero sculpted in a dynamic pose that breaks into the viewer's space, a hallmark of the baroque movement.

It challenges the viewer to walk around the statue and take in the pose, the character, and the movement from different viewpoints.

It is a complete departure from the classical style of Michelangelo’s David, for instance, which remains aloof, separate from the viewer.

David By Bernini Analysis and Meaning

The statue of David by Bernini is a very different depiction of the character, with a grim, determined expression as he winds up to throw the stone that would kill the giant Goliath, the body twisted in pent up energy, ready to unleash the fatal blow.

Rather than depicting the hero after the fact, or indeed the preparation for battle as Michelangelo did, the statue of David by Bernini captures the triumphant moment he became the hero of legend.

David The Marble Statue By Bernini Dimensions And Materials Used

Carved from Marble, David by Bernini is a life-sized depiction of the biblical hero, standing 67 inches, or 170 cm, in height.

David is more imposing than the dimensions would seem, though; his body is leaning down in an effort to fire his rock and as a more three-dimensional piece.

David by Bernini is a masterpiece that is used as an incredible example of the baroque style, but here are 7 things you may not know:

The Bernini David sculpture was the last in a series of sculptures commissioned by Cardinal Scipione Borghese, who was Bernini’s patron for much of his early career.

Although working on his Apollo and Daphne sculpture at the time, he was so concerned that this project would remain unfinished that he was hesitant to accept the new commission, and the Bernini David statue very nearly never happened.

However, after studying the Bible story to understand the character more, he took on the commission, working fast so he could get back to the unfinished Apollo work.

In just seven months, he created the masterpiece that is the Gian Lorenzo Bernini David for his patron.

Significance of David by Bernini

The Bernini David 1623 statue stands out as one of the finest examples of baroque style, with so much movement and a pose that brings the subject away from the plinth and into our world.

But it is not just the style of the work that is so significant, but the subject itself.

The David baroque statue is unlike any depictions of the hero that came before.

Usually presented after the battle as a triumphant hero, with Michelangelo’s version showing him preparing for combat, this version showed David in the moment of success, taking aim and releasing the stone that would give him victory over the giant.

It has a dynamism and energy that were a revolution at the time, the mastery of movement and understanding of how weight balance and other aspects of human anatomy created something very new, changing the way leading sculptors worked.

Are There More Statues of David in Rome?

No. However, there are three notable statues of David found in Florence, the most famous is Michelangelo’s, but also earlier statues by Andrea del Verrocchio and Donatello.

While David by Bernini was his last commission for his patron Cardinal Scipione Borghese, it was by no means his last sculpture.

In fact, he completed commissions for others before and after David too.

His most notable completed works include:

Compare And Contrast David By Bernini And David By Michelangelo

The two works take different moments in the story to create masterpieces. Michelangelo’s David is depicted before the battle, getting ready.

It is a master study of the human form, but the subject remains aloof, in a separate world from the viewer. Designed to be viewed from below, the 17-foot-tall David is hugely impressive even today.

But David by Bernini is something very different.

It is awash with movement, then he is stepping off the base and into our world, his body taught and twisted with effort as he unleashes the crucial blow.

Dynamic and characterful, it draws you in as you walk around, the smaller size also brings David into reality too, allowing the viewer to connect with the subject at a more visceral level.

Time to Get Tickets

The Borghese Gallery is extremely popular, so booking tickets in advance is always recommended.

Tours available from Get Your Guide or Tiqets give you entry and a guide to help you make the most of the experience.

The Gallery is open from 9 AM to 7 PM daily from Tuesday to Sunday, with entry closing at 5 PM.

Location and How to Get There

Borghese Gallery is located in the Villa Borghese close to the River Tiber near to Trevi. Metro Line A takes you close by, getting off at either Spagna or Flaminio, with just a short walk through the Villa Gardens to reach the gallery.

What is David sculpture by Bernini made of?

It is carved from marble.

Who commissioned David by Bernini?

What period does David by Bernini represent?

The David statue is a baroque period statue, and is one of the defining sculptures of the period. Bernini himself is considered the originator of the baroque style.

David by Bernini represents a landmark in sculpting, not just a stunning piece of work in its own right, but also where the baroque style that transformed art in the period really took hold.

A unique take on the familiar hero, it is a wonderful example of one of history’s best artists at his peak.