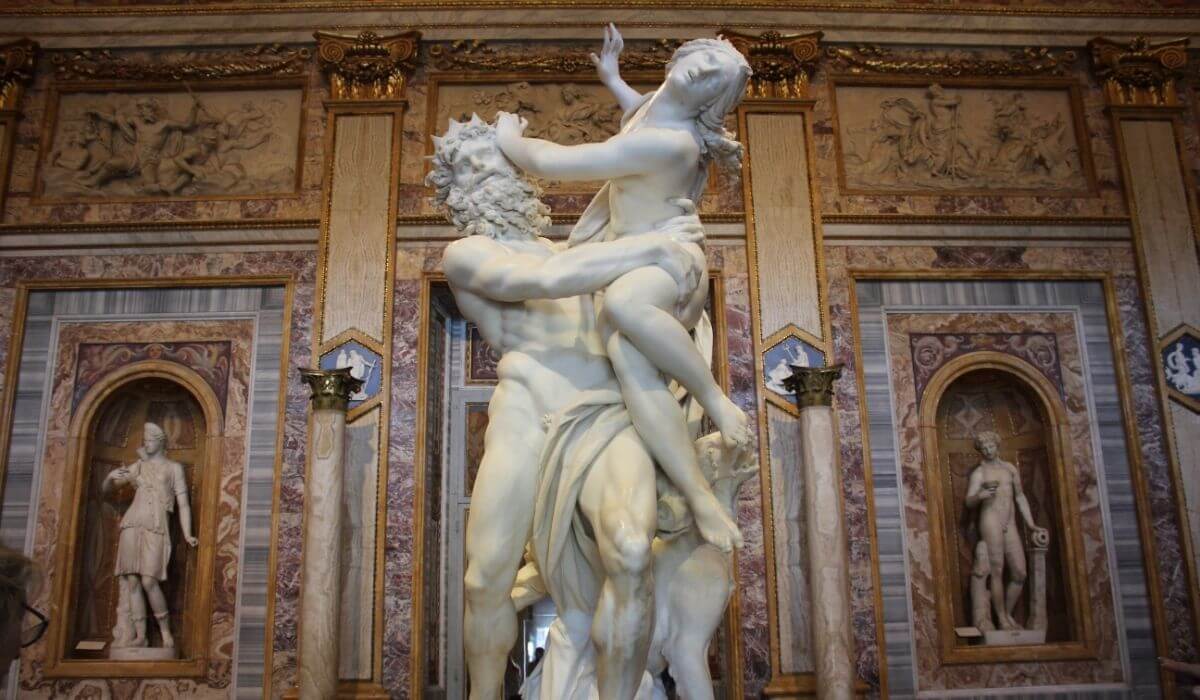 The Rape of Proserpina: All About Bernini’s Masterpiece

The famous Rape of Proserpina statue was created by a young Bernini – at the age of just 23!

It depicts Proserpina – a Roman goddess often associated with freedom – being kidnapped and carried off the underworld in the arms of Pluto.

The sculpture is one of many great works on display at the Borghese Galleries. It took around a year to complete, finally being finishes in 1622.

Let’s dive right in to the complete guide to the Rape of Proserpina Statue.

The Short History of the Rape of Proserpina Sculpture

The first thing to note about the name of the statue is that the word “rape” here does not mean an actual sexual attack.

The naming comes from the Italian word for “seizure” or “capture” – which is “raptus”. The Rape of Proserpina was requested to be created by one of the Borghese Cardinals.

It was held in private hands by Cardinal Ludovisi before being transitioned back to the Borghese family, taking up its rightful place in the Borghese Galleries.

About Italian Artist Bernini The Rape Of Proserpina

Gian Lorenzo Bernini is famous for his baroque-style sculptures, but he was first and foremost an architect. Born in Naples in 1598 he lived in Rome where he died in 1680 at the grand old age of 81.

His vast career included architectural designs that feature in prominent buildings, and he was even also a playwright.

His famous works include the striking Barcaccia fountain at the bottom of the Spanish Steps as well as the Fontana del Tritone and the Apollo and Daphne sculpture. And let’s not forget St Peter’s Basilica!

The Rape Of Proserpina – How did Bernini Make The Skin Look Real?

One of the most striking parts about this fabulous sculpture is how Bernini managed to make the skin – particularly on the leg of Proserpina – look so lifelike!

The imprints of Pluto’s hand on the skin actually look like they are indenting into the flesh. Bernini achieved this look by using Carrara marble, a particularly soft form of marble.

He was known to take much pride in his ability to make the skin so lifelike in a material like marble.

The Rape Of Proserpina Story Explained

The sculpture is based on the legend of the rape of Proserpina. She was supposedly the daughter of Ceres (goddess of fertility) and the patron of thunder Jupiter.

She was spotted by Pluto one day when she was picking flowers, and he became obsessed with her. He commissioned a chariot with four black horses and rode by, kidnapping her.

Her mother Ceres attempts to save her were in vain, and in her anger she dried up the earth.

The Carrara marble is quarried in Italy in the Apuan Alps.

It comes in a variety of colours, but white is its most popular type. Bernini liked to work with this material as it is soft, and makes for a more lifelike appearance.

He used it for the Rape of Proserpina statue, which stands at 225 centimetres high.

The Rape of Proserpina vs Persephone: What’s the Difference?

Like many stars of Roman mythology, there is a Greek equivalent.

For Proserpina, the equivalent is Persephone. The story of the abduction is also replicated in Greek mythology – Persephone was abducted by Hades in the same fashion.

Here’s A Detailed Description Of The Rape Of Proserpina Statue

From the lifelike grip on Proserpina’s legs to the Rape of Proserpina tears falling from her eye Bernini did an amazing job of making the statue lifelike.

Adding to this, her hair is flowing behind her, adding to the perception of movement. Pluto’s stance – with his rigid legs – imply he is moving and struggling as he makes his exit.

The size and position of the protagonists makes for one of the most striking sculptures of Bernini’s portfolio.

Is There The Rape Of Proserpina Painting?

You can purchase several depictions of the Rape of Proserpina paintings online. Check out some examples here.

The Rape Of Proserpina Similar Artworks

If you visit the Borghese Gallery you should also check out the Apollo and Daphne sculpture.

Also created by Bernini, it depicts Daphne trying to escape Apollos love as he relentlessly pursues her.

Can I See Online The Rape Of Proserpina Statue 360?

If you are not lucky enough to be making a visit to Rome in the near future, then don’t worry.

You can check out this stunning 360 degree view online to get a flavour for this great statue’s grandeur.

Tickets for the Borghese Galleries must be reserved in advance. We recommend to book as soon as you know you are going to Rome.

That’s because there are only a certain number of people allowed to enter every day. Get your Galleria Borghese tickets here today.

Visits last 2 hours per session. The first session begins at 9am, with the last leaving at 5pm.

Since the groups are limited, and the size is controlled, there is no “best time” to visit – you’ll be guaranteed entry as long as you have your ticket.

Where Is The Sculpture & How to Get There

The Galleria Borghese Rape Of Proserpina needs to be seen to be believed!

Tip – To access the museum take Metro Line A to Spagna or Flaminio, then walk through the stunning Villa Borghese Gardens to get to the gallery.

Which artist sculpted the Rape of Proserpina?

The sculpture comes from the hands of Bernini himself!

The Rape of Proserpina sculpture is made of what?

The sculpture is made of Italian marble.

Legend has it that she was abducted by Pluto.

The Rape of Proserpina is just one of many, many masterpieces in the Borghese Gallery! If you want to see more, then check out the rest of guides on our website to plan your trip!