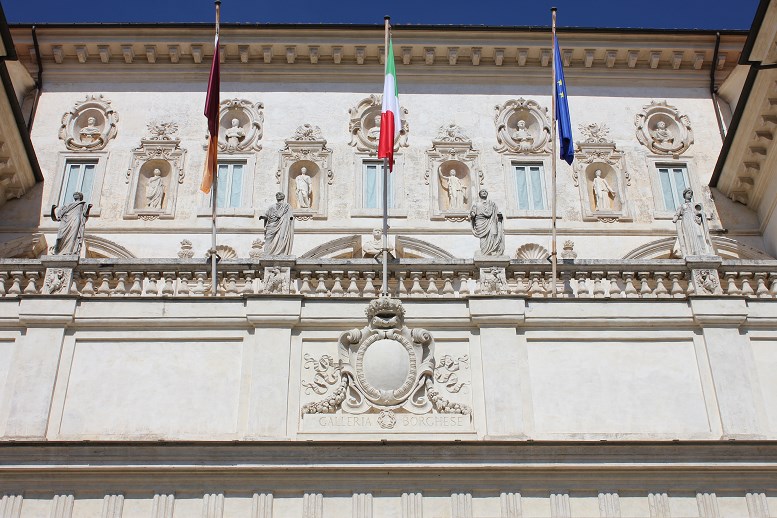 The History of the Borghese Gallery

The Borghese Gallery is one of the best art galleries in the world. It’s packed full with masterpieces from different periods of time, and it’s a gallery with a history of its own.

Here’s everything you need to know about the history of the Borghese Gallery, including some interesting facts.

The History of the Borghese Gallery

The Borghese Gallery dates back to the 17th century, when it was the private home of Scipione Borghese, an art enthusiast. Borghese was an Italian cardinal and the Pope’s personal secretary.  He commissioned architects to build the Villa in the style of an Ancient Roman Villa. And when his home was complete, he filled it with his private art collection.

The growth of Scipione’s art collection

To show off his collection, Scipione Borghese used the Borghese Villa as the ultimate party house. He hosted the parties of the century, impressing noblemen and artists alike with his unique home and art displays.

Four centuries have passed since the Villa Borghese was a thriving party house, and until 1903 it remained the property of the Borghese family. But in 1903 the Italian government purchased Villa Borghese, and opened it to the public as the Borghese Gallery.

Certain masterpieces have come and gone, with some works being added or loaned to the collection, and some being relocated. But the gallery still contains the majority of Scipione’s original collection, and is one of the best attractions in Rome.

Why is the Borghese Gallery one of the world’s best art collections?

The Borghese Gallery isn’t just Rome’s best art gallery, it’s also one of the best art galleries in the world. Why? Because it’s packed with some of the most impressive and influential masterpieces from the Roman, Renaissance and Baroque periods.

You can find works from artists who paved the way towards new styles of art, such as Titian, Caravaggio and Raphael. It’s also the best art gallery in the world for seeing Bernini works. You can see his first sculpture The Goat Amalthea with the Infant Jupiter and a Faun and the famous Apollo and Daphne sculpture.

The extensive history of the Borghese Gallery means there’s many stories and facts to be told about the gallery itself and the works inside it. Here are some interesting facts about the gallery and the Galleria Borghese artworks.

Sacred and Profane Love is the gallery’s most valuable piece

Out of all of the Galleria Borghese artworks, Titian’s Sacred and Profane Love is the most valuable and sought-after painting in the gallery.

It’s a painting that’s been analysed and interpreted by thousands of art critics over the years, but the meaning behind it has never been fully unravelled.

As one of Titian’s most impressive paintings, individual art collectors, wealthy families and museums have all tried to acquire this painting. But despite numerous offers, including a generous offer of 2.6 million euros from the Rothschild family, the Borghese Gallery has kept hold of this precious masterpiece.

The gallery almost had a different name

The Borghese family were at first reluctant to give the villa and gallery their family name. They insisted that the villa could only be named Villa Borghese if it was the most impressive building and gardens in all of Rome.

They were clearly satisfied that it was indeed the best villa in Rome, as the villa and gallery now proudly bear the name Borghese.

The gallery lost two Roman masterpieces to the Louvre

Two of the most renowned Roman masterpieces that were originally housed in the Borghese Gallery have been moved to the Louvre in Paris. From the 1620s onwards Villa Borghese had been the proud owner of Roman sculptures such as the Borghese Gladiator and the Sleeping Hermaphroditus.

But in 1808, these famous Roman masterpieces were sold to the Emperor and transferred to the Louvre, where they’ve remained ever since. The Emperor had his heart set on acquiring the antiquities to display in his Musee Napoleon. It all came down to politics: the Emperor wanted his museum to be the greatest in Rome. Prince Borghese (Napoleon's brother-in-law) was reluctant to sell the artworks, but denying the Emperor’s wishes wasn’t easy to do.

The Borghese Gallery is home to a range of different masterpieces from Roman, Renaissance and Baroque artists. You can easily find Galleria Borghese artworks that interest you by exploring the different period-themed rooms.

The Bernini collection includes some of his best works from throughout his life. You’ll be able to see two of his most famous sculptures, Apollo and Daphne and The Rape of Proserpina.

What makes these Galleria Borghese artworks so impressive is the fact that whilst they’re made from the marble, they look so lifelike. You can feel the emotion that’s portrayed so vividly, and the sculpted bodies look tender to touch.

There’s also a collection of important paintings from Titian, Raphael, and Caravaggio. Titian’s Sacred and Profound Love is one of the most popular paintings in the gallery.

Classical masterpieces in the Borghese Gallery

Whilst many of the Borghese Gallery’s Roman art has been sold or transferred over the years, you can still browse some incredible classical antiquities.

On the ground floor you’ll find Roman sculptures from the 1st to the 3rd century AD. Amongst the remaining Roman sculptures you’ll also find Canova’s Pauline Bonaparte as Venus Victrix. Whilst this sculpture was created in the early 19th century, it was made to resemble Roman pieces, and is considered a neo-classical masterpiece.

How to get skip the line tickets?

The Borghese Gallery is such a popular attraction that set entrance times have been introduced, limiting the amount of people in the gallery to 360 at any one time. Learn more about how to plan your visit by reading our article on that topic.

This means you need to buy tickets in advance to avoid disappointment and ticket queues. So book your tickets online, and pick an entrance time that suits you.

This way you’ll be able to enter straight away at your chosen entrance time – no extensive queues or waiting time.

The Borghese Gallery contains some of the most impressive masterpieces in the world, from Bernini’s Apollo and Daphne to Titian’s Sacred and Profane Love.

It’s easy to imagine the history of the Borghese Gallery coming to life, as you walk through each section, imagining the parties that once raged there.

Visiting the gallery is like taking a journey back in time. You can forget about the busy city outside and just enjoy the masterpieces and the beautiful villa gardens.