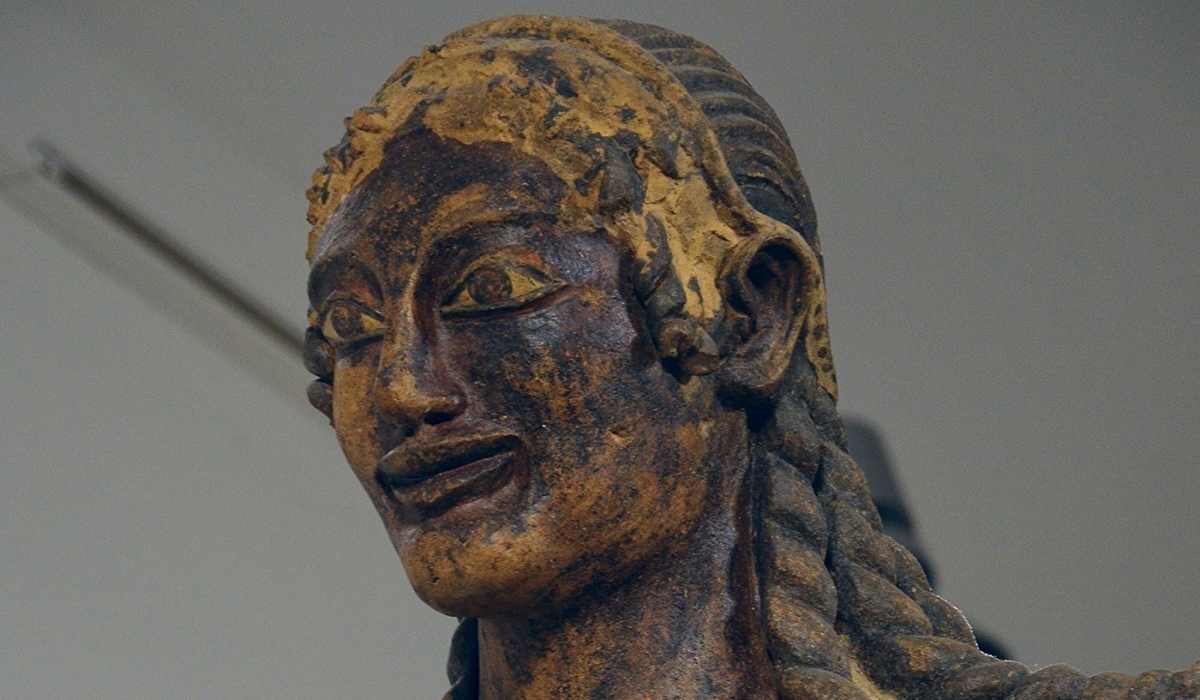 Traditional Etruscan statues were usually made in materials such as terracotta, and the Apollo of Veii composition was no different.

This life-size statue is believed to have originally been part of a bigger depiction of Heracles and Apollo.

It was mounted about twelve metres above ground at the Minerva Sanctuary in Portonaccio, which lies around 18 kilometres from Rome.

The History Of Apollo Of Veii

The Minerva Sanctuary preserved a decent amount of Etruscan terracotta sculptures. The Apollo of Veii – in Etruscan Apulu of Veii – is perhaps the most famous and best kept.

Standing at 5 feet 11 inches high and was erected above head height in order to make a striking impression to passers by.

Carved at a time when Veii (modern day Isola Farnese) was a very real rival to Rome, the temple of Apollo at Veii was decorated with many such sculptures designed in a similar way.

Created at around 500 C, the statue is loosely modelled on Greek design, but maintains a very unique Etruscan style which later modelled Roman art.

What Is the Material That The Apollo of Veii Is Made From?

The Apollo of Veii is made of terracotta. Like other traditional statues, it would have been first formed, and then baked in a kiln at low temperature.

It is believed that the beautiful design of the statue was then painted in various colours. Apollo’s toga for example is believed to have been lined in blue colour.

It is believed that the Apollo of Veii terracotta statue was mounted facing Heracles, in a standoff over the god Apollo’s sister’s beloved deer.

Like many Etruscan statues the design is loosely modelled on the Greek, and contains several elements of archaic Greek design. A light smile can be seen on the lips of the statue, and the bright paint is another nod to grecian tradition.

However, that is where the similarities largely end. Due to the way the statue is positioned – in full movement, clothed and with an egg shaped head – the sculpture takes on a unique Etruscan appearance.

Importance of Apollo of Veii

The Apollo statue at the Minerva Sanctuary at Veii is one of the most important and well preserved pieces of Etruscan art.

Built in honour of the god Apollo, it was associated with the Temple of the cult of Minerva.

The main purpose however was to demonstrate the prosperity of the Veii area in the face of increasing Roman dominance.

Temple of Minerva and The Sculpture of Apollo Veii

This Etruscan temple, of which there were few examples, became a blueprint for renaissance era buildings elsewhere in the region of modern day Italy.

The foundations of this amazing building are still visible today in their original location. They reveal a deep porch at the front with three other rooms – likely dedicated to the gods Minerva, Jupiter, and Juno.

Where Is the Temple of Apollo at Veii Located

The ruins of the Temple of Apollo can be found within the 15,000 hectare Veio Regional Natural Park.

Surrounded by oak trees, the park is a pleasant place at which you can explore history and also get out of the big city for a few hours.

How to Quickly Get There? Visit the Temple of Apollo at Veii

Perhaps if you have visited Rome before and seen the main top attractions, or have a deep interest in Etruscan history and architecture, you may wish to visit the Veii area.

The ruins of many Etruscan statues and buildings including the Apollo of Veii can be seen at the Veio Regional Natural Park.

You can get to the park by taking the train from the Flaminio station to Civita Castellana-Viterbo. Entry is free, and you can find out more about the park here.

See the Statue of the Apulu of Veii

If you only have a brief trip to Rome you will probably want to remain in the city.

Don't worry, you can get a taste of Etruscan architecture by viewing the Statue of Apollo itself. That’s because it is actually held in the National Etruscan Museum in Rome.

Tip – Get your tickets for this great museum in Rome online here.

Where to Stay – 2 Most Beautiful Hotels near National Etruscan Museum

Looking to stay right beside the National Etruscan Museum? Then look no further than these beautiful hotels.

Of particular note is the lounge bar, the restaurant and the stunning roof terrace, on which you can enjoy the fabulous breakfast.

With rooms starting at around €200 for a double, this is one great hotel in an excellent location.

Fancy more of a stately home feel? Then this boutique hotel only 400m from the Villa Borghese may do the trick.

Luxury decor, parquet floors and a fabulous breakfast make this hotel an excellent choice for those wishing to be close to the action when visiting the Villa Borghese and the National Etruscan Museum.

Here are the top questions we receive about the statue of the Apollo of Veii.

Where was the Apollo of Veii originally situated?

The statue of the Apollo of Veii was located in the city of Veii, at the sanctuary of Minerva, 18kms north of Rome.

Why was Apollo of Veii on the roof?

The statue of Apollo of Veii was part of a larger scene mounted 12 metres above ground at the Temple of Minerva in Veii.

How to see Apollo of Veii at the National Etruscan museum?

The Apollo of Veii statue at the National Etruscan Museum displays. You will need a ticket to enter the museum, which is located near the Villa Borghese in Rome.

What is the Apollo of Veii Size?

The statue is about 5ft 11 inches in height.

If you have plenty of time to spend in Rome then the Veii area is definitely worth a look. However, most people will usually only have just enough time to fit in the key main attractions in Rome.

Don’t worry – we can help you navigate the must sees. Head on over to our attraction guides to work out what you should do on your trip to Rome!